Ubitransport is enlisted for the second time in the Top 100 Europe of the famous American magazine Red Herring, which rewards companies in Europe that deploy major innovations and technologies in their respective industries. Ubitransport is the only French company to be distinguished in the mobility category.

On December 16th, Red Herring announced the 100 winning companies among nearly 1,200 candidates from all over Europe. Ubitransport was evaluated on its financial performance, technological innovation, management quality, overall business strategy and market penetration.

This ranking is a valuable tool for any player wishing to partner with innovative and promising companies in the European tech ecosystem. Ubitransport had already convinced the Red Herring jury of its development in 2018. It is once again proudly representing France, alongside 10 other French companies.

At a time when Ubitransport is preparing its deployment in Europe, this trophy confirms the role that the scale-up can play within the European tech ecosystem.

“We believe Ubitransport embodies the vision, drive and innovation that define a successful entrepreneurial venture. Ubitransport should be proud of its accomplishment, as the competition was very strong” says Alex Vieux, editor and CEO of Red Herring.

French leader in fare collection systems in terms of number of networks, Ubitransport is now in the running to participate in the “Top 100 Global” competition in October 2022.

Who is Red Herring?

Red Herring is an American media company that publishes a global magazine on new technologies. A reference for investors and decision-makers, each year since 1996 it has established a Top 100 of the most promising companies by continent and globally.

A project to discuss? Contact us for a demonstration.

You want to join the Ubitransport adventure? Apply here ! 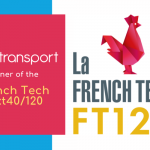 UBITRANSPORT WINNER OF THE FRENCH TECH NEXT40/120Awards and prizes, Market

Ubitransport has been ranked among the 500 fastest-growing French companies in 2022.Awards and prizes, Media